GPS Transponder tracking for shoreside friends and family will be available at this link:
http://bermudarace.com/2014-race/race-tracking/

The service is being provided by http://www.yellowbrick-tracking.com/  YellowBrick will undoubtedly have a link on their site also.

Any shoreside friends or family should NOT be concerned if our tracker malfunctions or fails to report.  They CAN call the boat satellite phone and let us know that our tracker is not functioning.  IF we do not answer the Satellite Phone they SHOULD try to call again and if we do not answer again they SHOULD contact race officials to inform them.  Even then malfunctions and battery issues can occur and no undue stress should be suffered.

Looking forward to the race!!!

P.S. – I decided not to post publicly the satellite phone number for the boat.  I am going to presume that any friend or family will have received the number (and instructions NOT to call it unless emergency) or that they will know of family member to contact to inform…

Working hard to make some last minute pipe berths!  Huge thanks to the guys at McMichaelYachtBrokers.com and Derecktor.com for all of their assistance….  and oh yeah…  Jeff Jackson at Cove Canvas in Mamaroneck!

Shooting for hardware on the pipe berths like this! 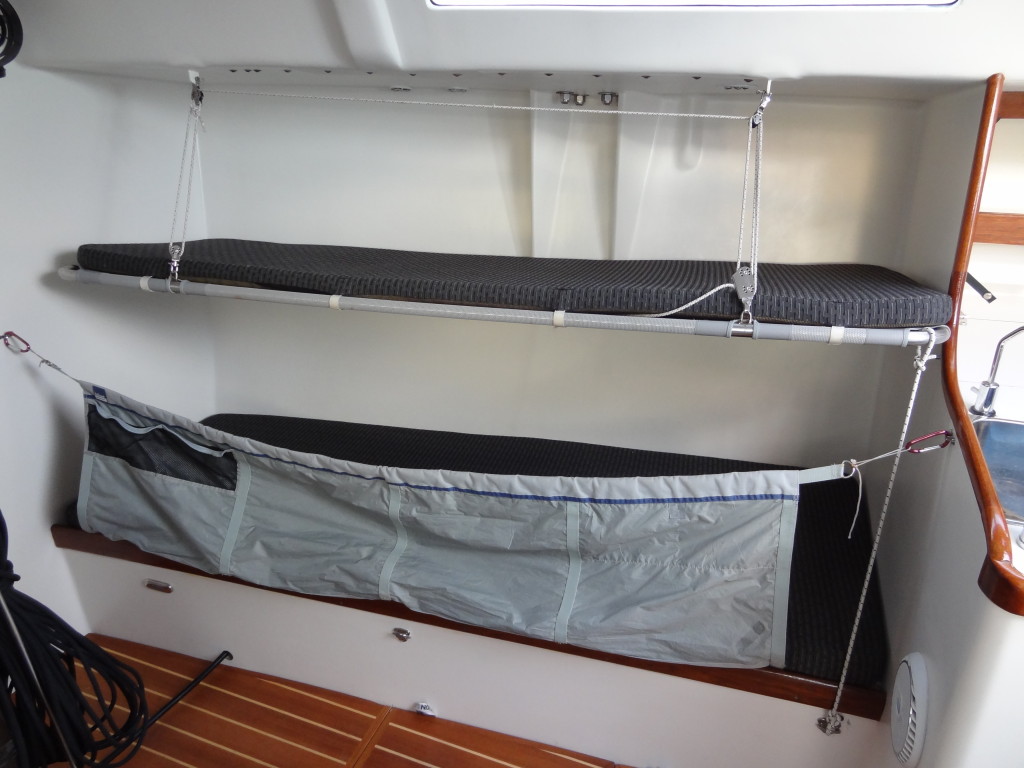 Sorry Schaefer…but going with this instead:

I’ve been formally emailing the crew since December 24, 2013.  I’m told the number of emails now totals OVER 950.  It takes a lot of communication to organize and prep for this race.  It can be “fun” to be communicating a lot and sharing a little humor but 950 is suffocating also.  We’ve implemented the *IMPORTANT* – TOPIC subject line for important/critical communications and asked for no ‘reply-alls’ to these.  I think it has made a nice difference to those that were feeling drowned in email.  It seems hard to believe it has been 950…but of course when you a do a little math you realize it only takes one email to 12 crew members for which they each reply-all and that becomes a LOT of emails very quickly.

Looking forward to 4 days at sea with NO EMAIL!

I like to ponder and learn from every “tragedy” to further my own personal preparedness and clear a mental path towards best heat-of-the-battle crisis decision making.

The tragedy of the Cheeki Rafiki is one that I have pondered (amongst many others) and I feel that I have learned something from one of their most obvious mistakes that is “hiding” within the story.
Yes there is the “obvious” mistake of not having the liferaft on deck…however the subtle “hidden” lesson is within the story and one I think in many ways we TRAIN many sailors to make!  There is a saying, “You step UP into the liferaft”…and “ALWAYS stay with the boat (until it is gone)”…  These lessons and training I think led to the Cheeki Rafiki disaster.
As the story goes, the crew called in via Satellite Phone and said they were taking on water, could not identify the source of the leak and were diverting to the Azores.  I believe that most of them would be alive today had they not been reluctant to get the liferaft on deck and to pre-emptively inflate it.  “Stepping up” into the raft doesn’t need to mean waiting to inflate it until you need it!
Upon an emergency happening 1) Any liferaft should be staged for inflation.  At the skippers’ discretion and EARLY the raft should be inflated and towed astern or alongside.  So what if they had towed their raft all the way to the Azores “unnecessarily”…  They had an UNIDENTIFIED leak…and their raft was found below.
May we “learn” in their memory and not have their lives be in vane.  Honahlee’s 6 man raft will be lashed onto the sea hood and the 10 man will be either below or lashed on the windward side of the cabin top.  The 10-man stages nicely in the bottom of the cockpit or possibly from it’s position on the cabin top.
Again…please no unnecessary reply all’s to *IMPORTANT* subject line emails.
Thanks guys!
Link to story: http://www.bbc.com/news/uk-27553902 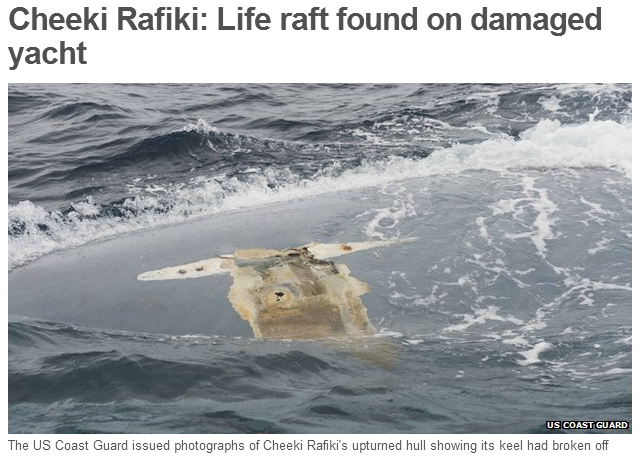 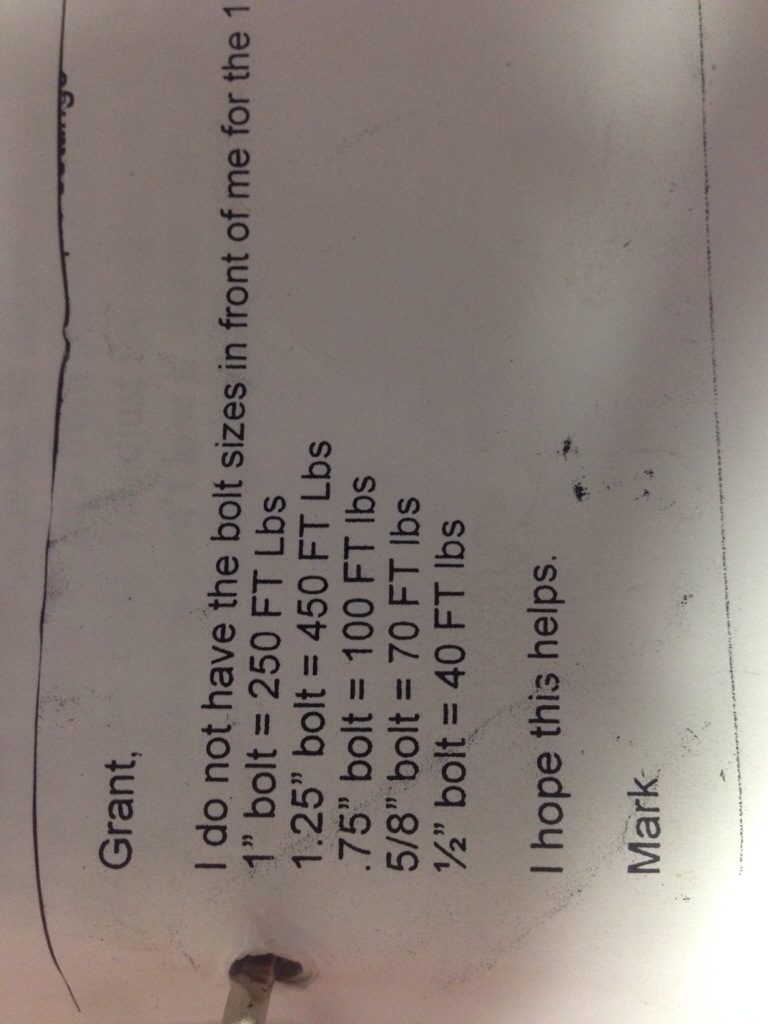 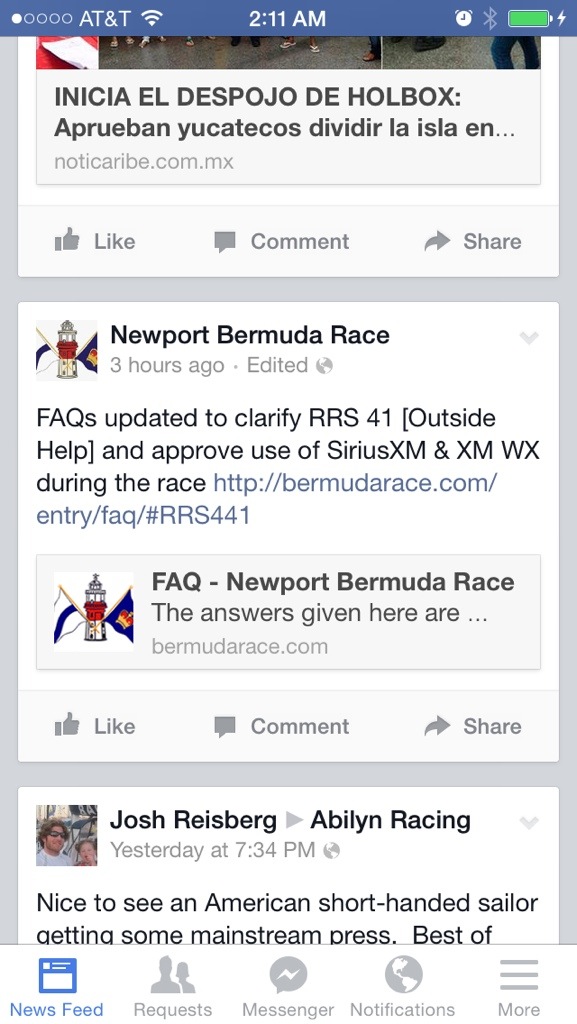 Will need to follow the link and read more…. 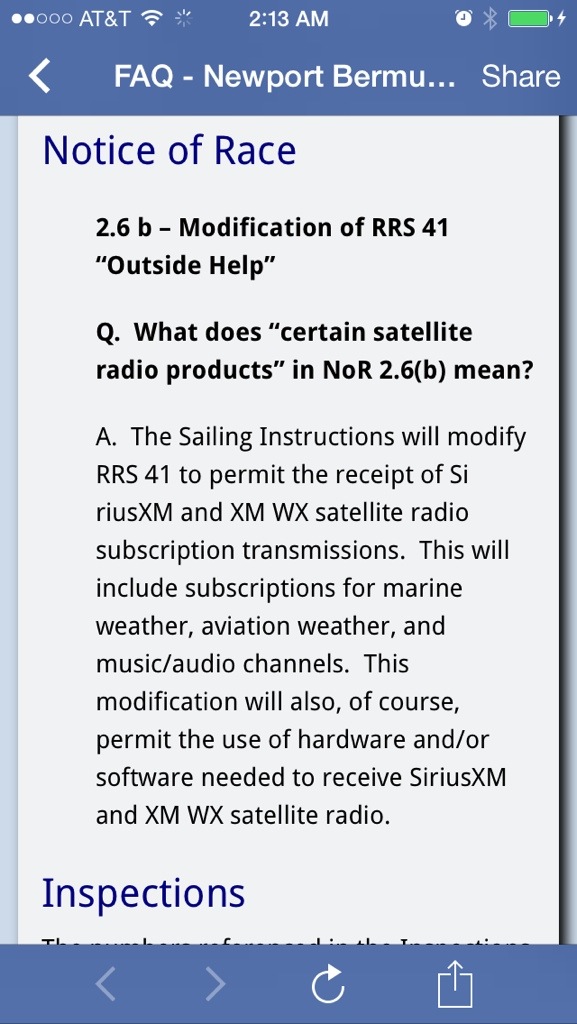 The moon’s phase for the 2014 Bermuda Race (from http://stardate.org/nightsky/moon) 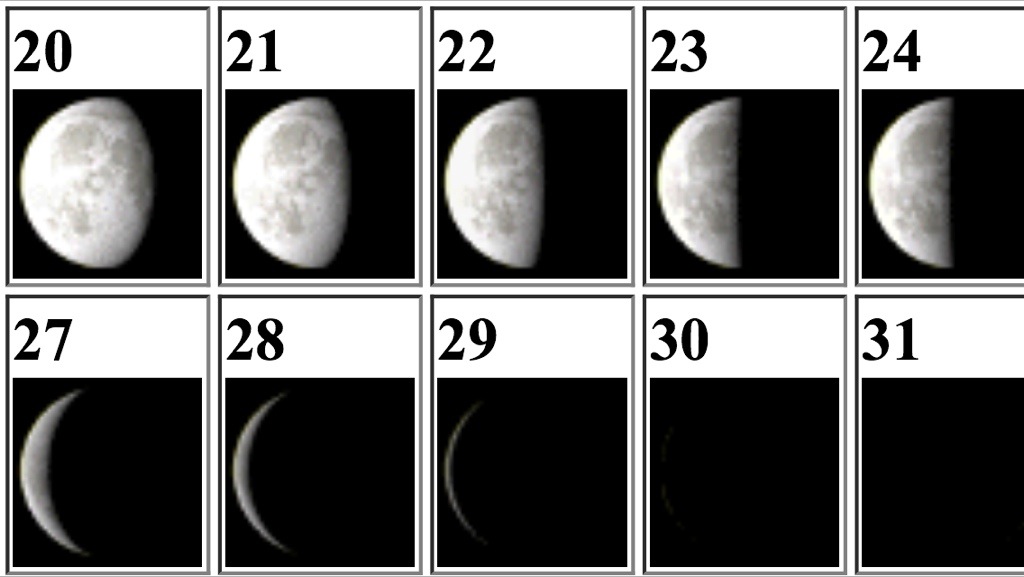 Gulf stream may be getting “interesting”…  Will be interested to read the next update from the pros as to what is happening to the previously obvious conveyor.  And what direction is that upper feature’s currents? 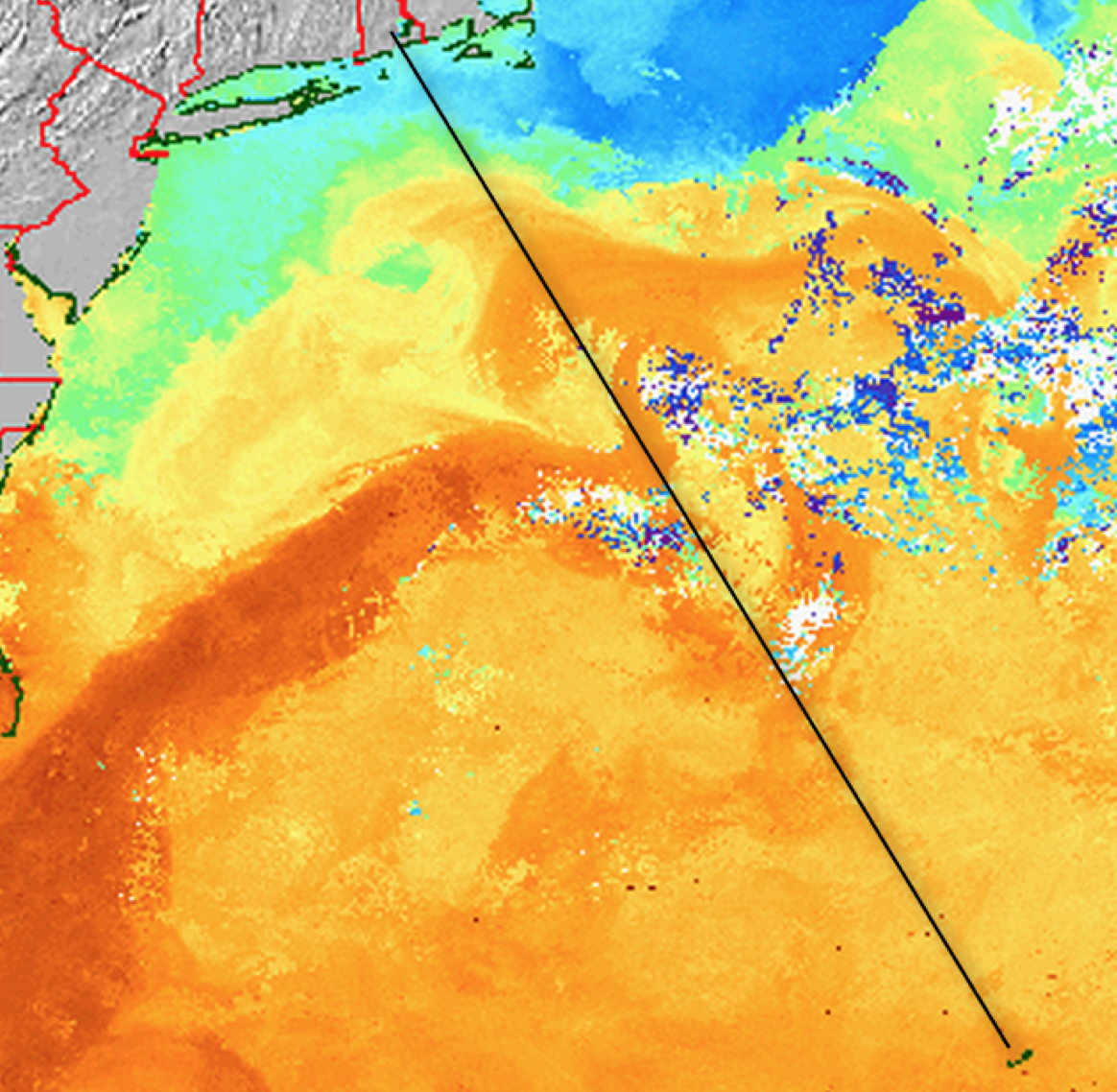 Gentlemem…It was an extremely productive weekend.  There is always “more” to do in pursuit of perfection but progress was made!  Huge thanks to Peter Carpenter and Gerry Canet.

Pete assisted in removing the steering cables, then the quadrant and the autopilot control arm and eventually dropping the rudder out of the boat after determining that the play in the lower rudder bearing was sub-optimal.  Thx Pete!.
Gerry and his son Augusto came on Sunday and we setup scaffolding and were able to burnish the entire bottom to >1,000 grit.  Augusto provided moral support and entertainment with his enthusiasm for driving.  Augusto got quite a bit of driving in on hist first ever day of driving a golf cart!
I continued on Sunday and made progress in modifying some stainless pipe berths…if all goes well (fingers crossed) we may have two more somewhat comfortable bunks in the main salon.
Bill Slattery and John Fallon both stopped by to provide a little moral support which was much appreciated.
THERE IS ONLY ONE MORE WEEKEND before the boat leaves for NEWPORT 0-:  I need to update my list and determine what help I may need either a weeknight or two or during the coming weekend.  Please start looking at your schedule(s) and thinking about where you might be able to carve out a couple of hours to help…  We may need to do one semi-mandatory gathering prior to the boat leaving…  More info to follow…
Attached are a few pictures of some of the efforts and events mentioned above: 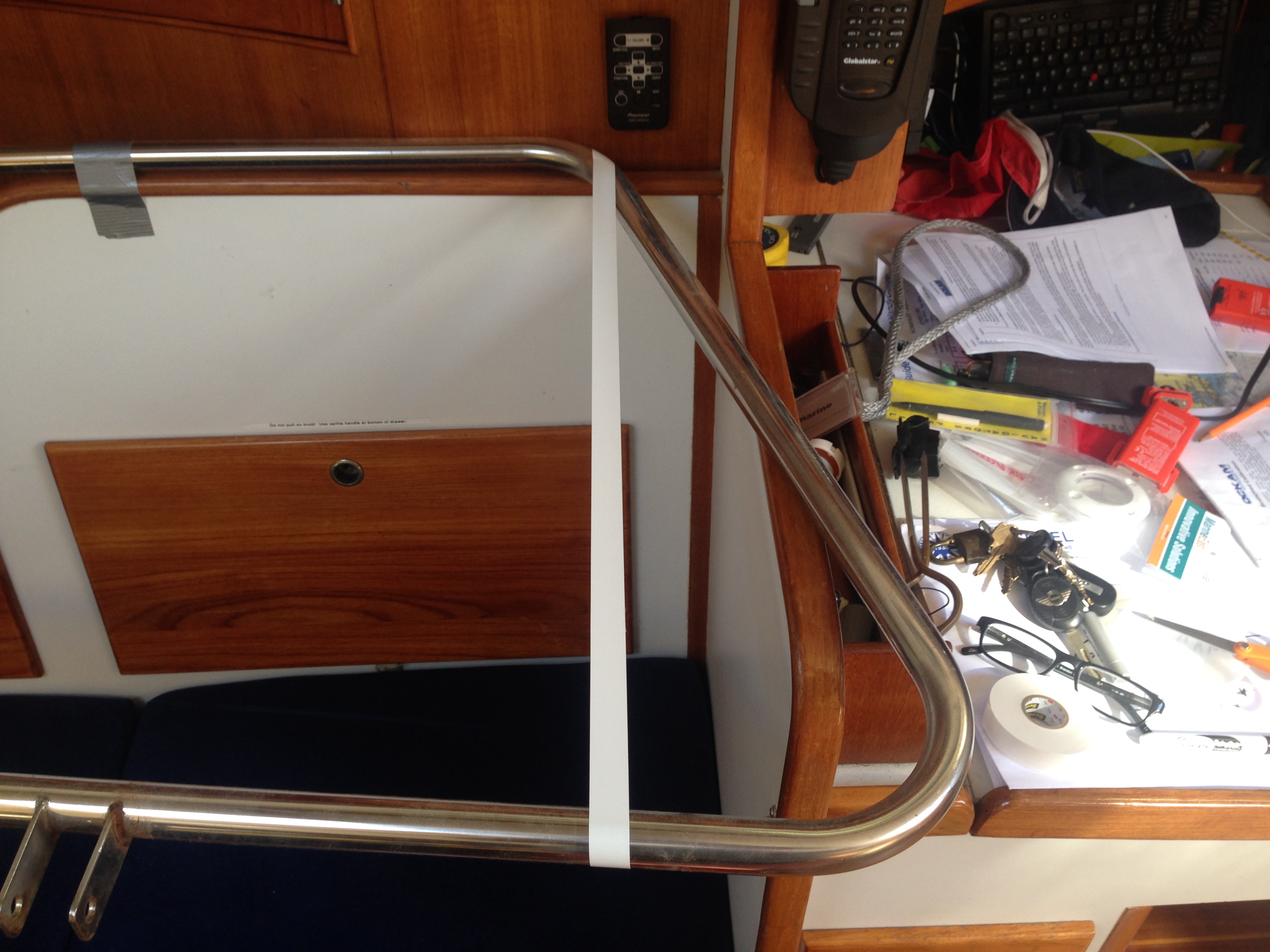 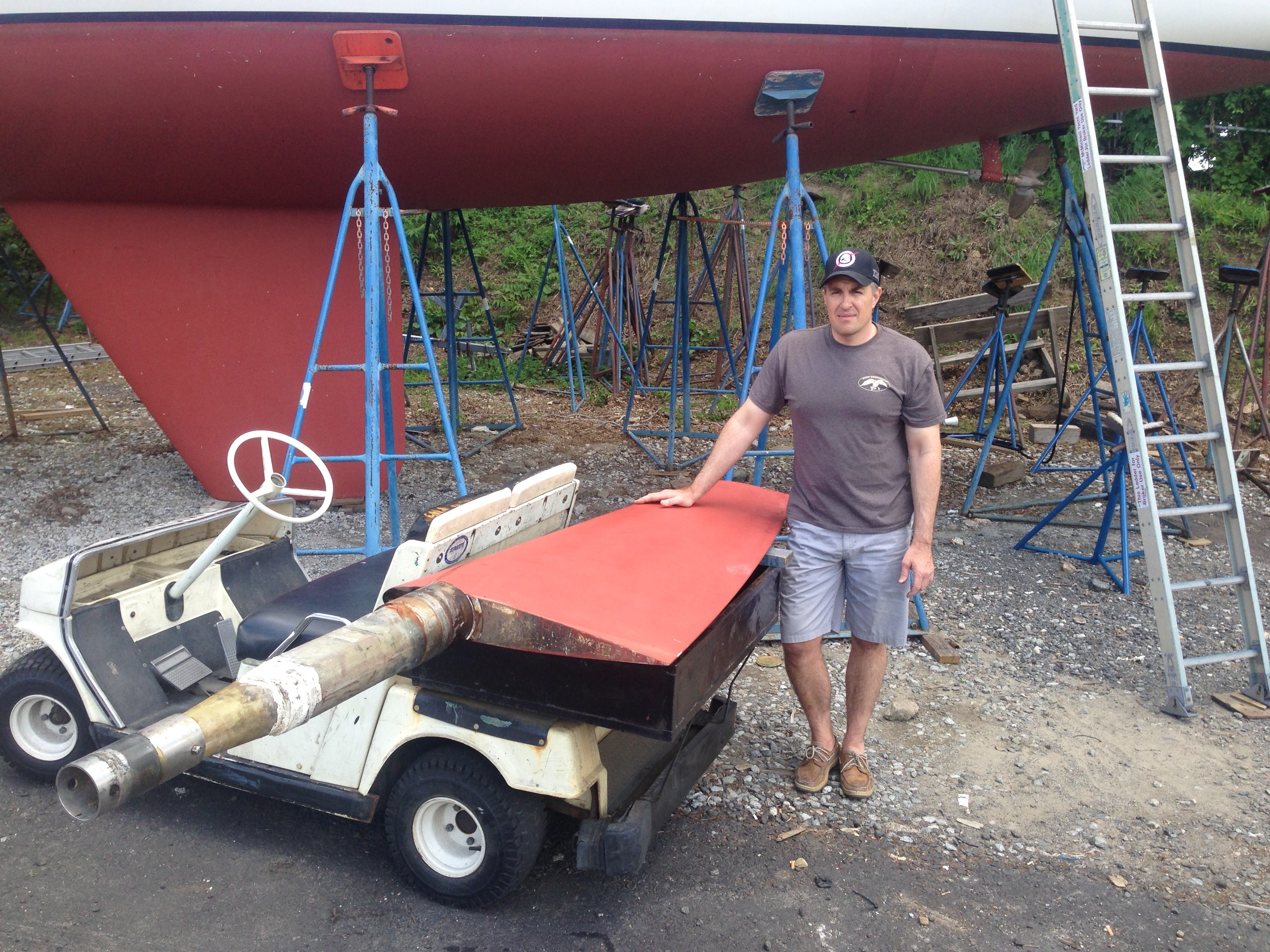 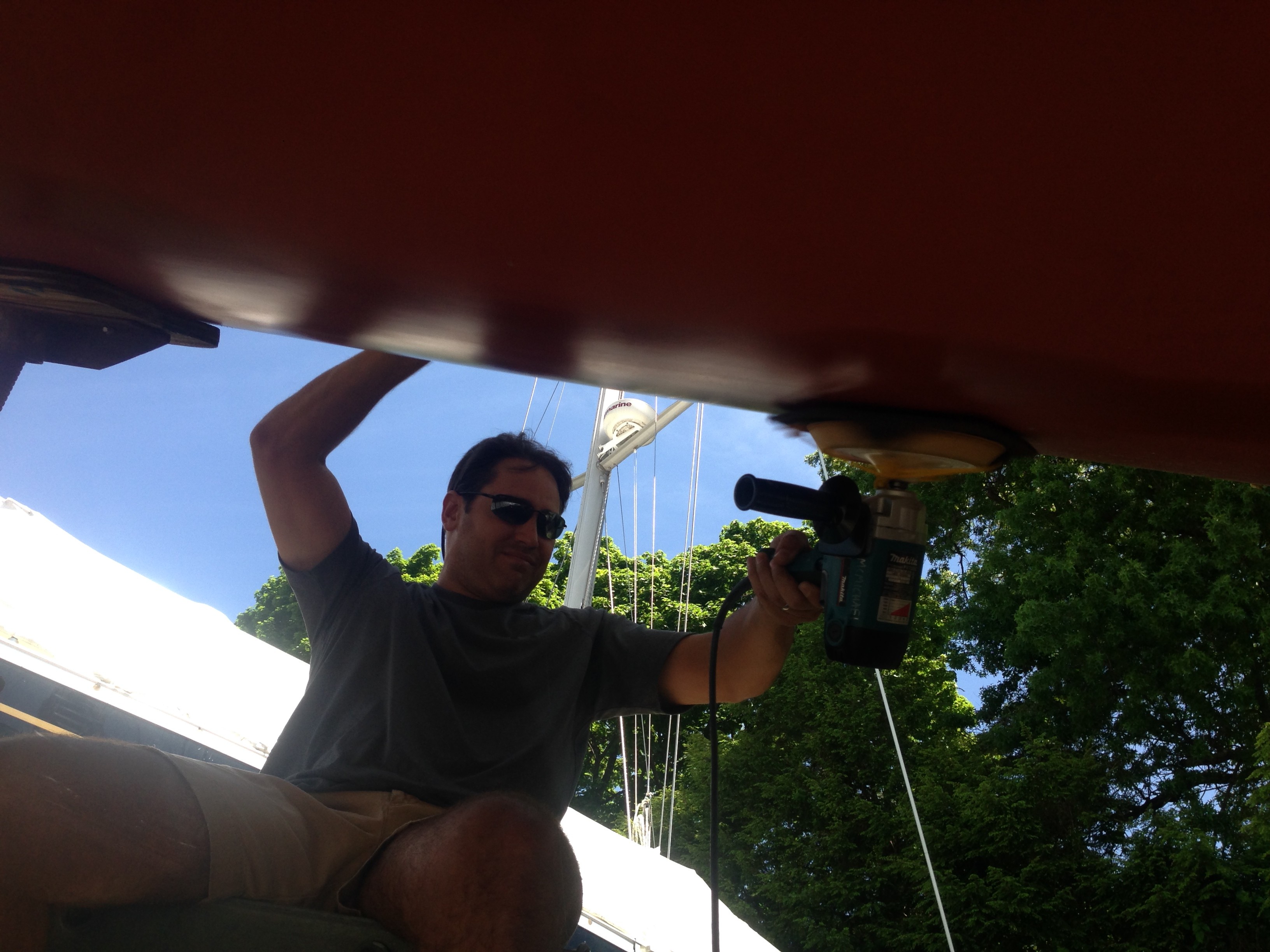 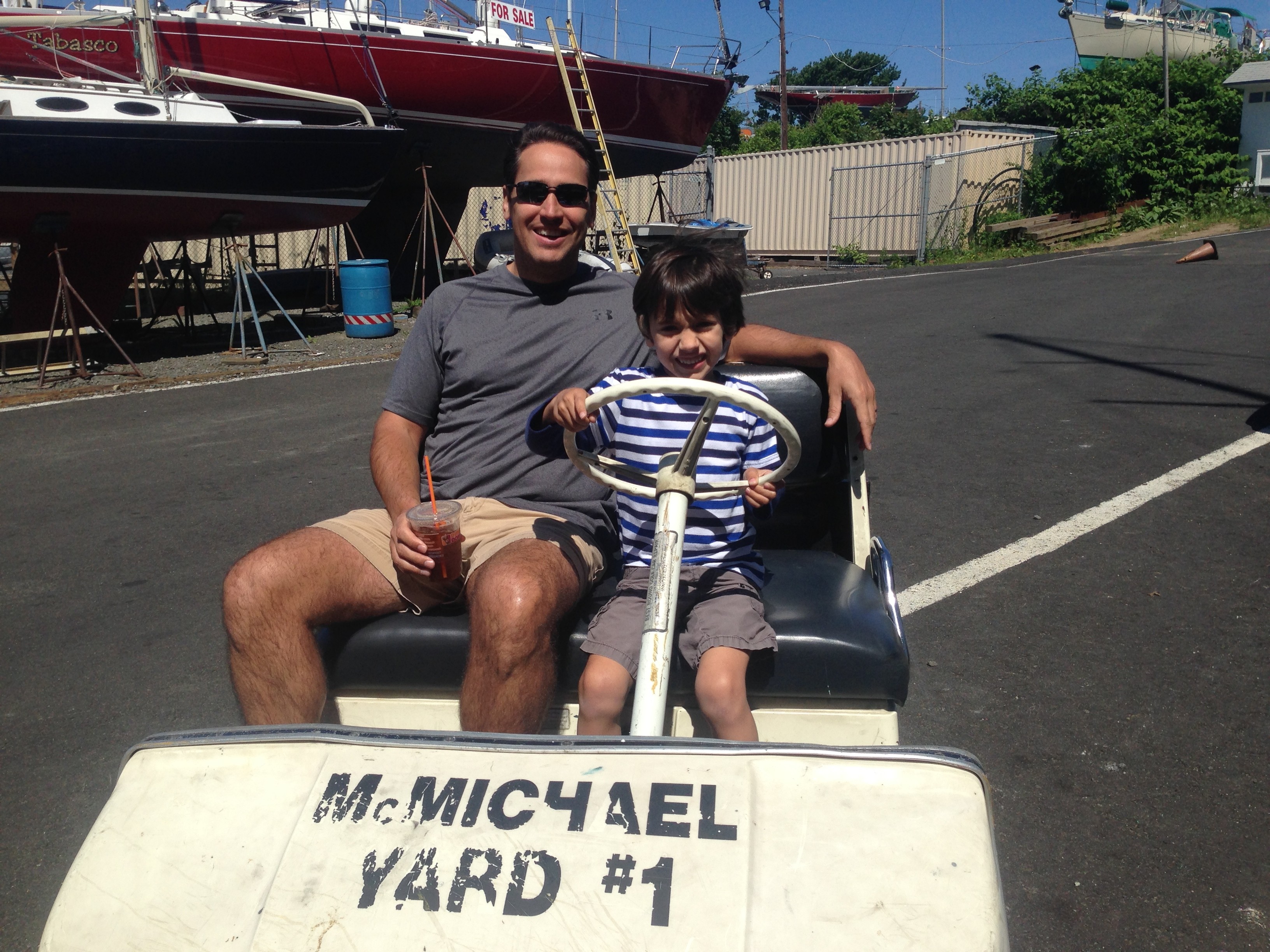 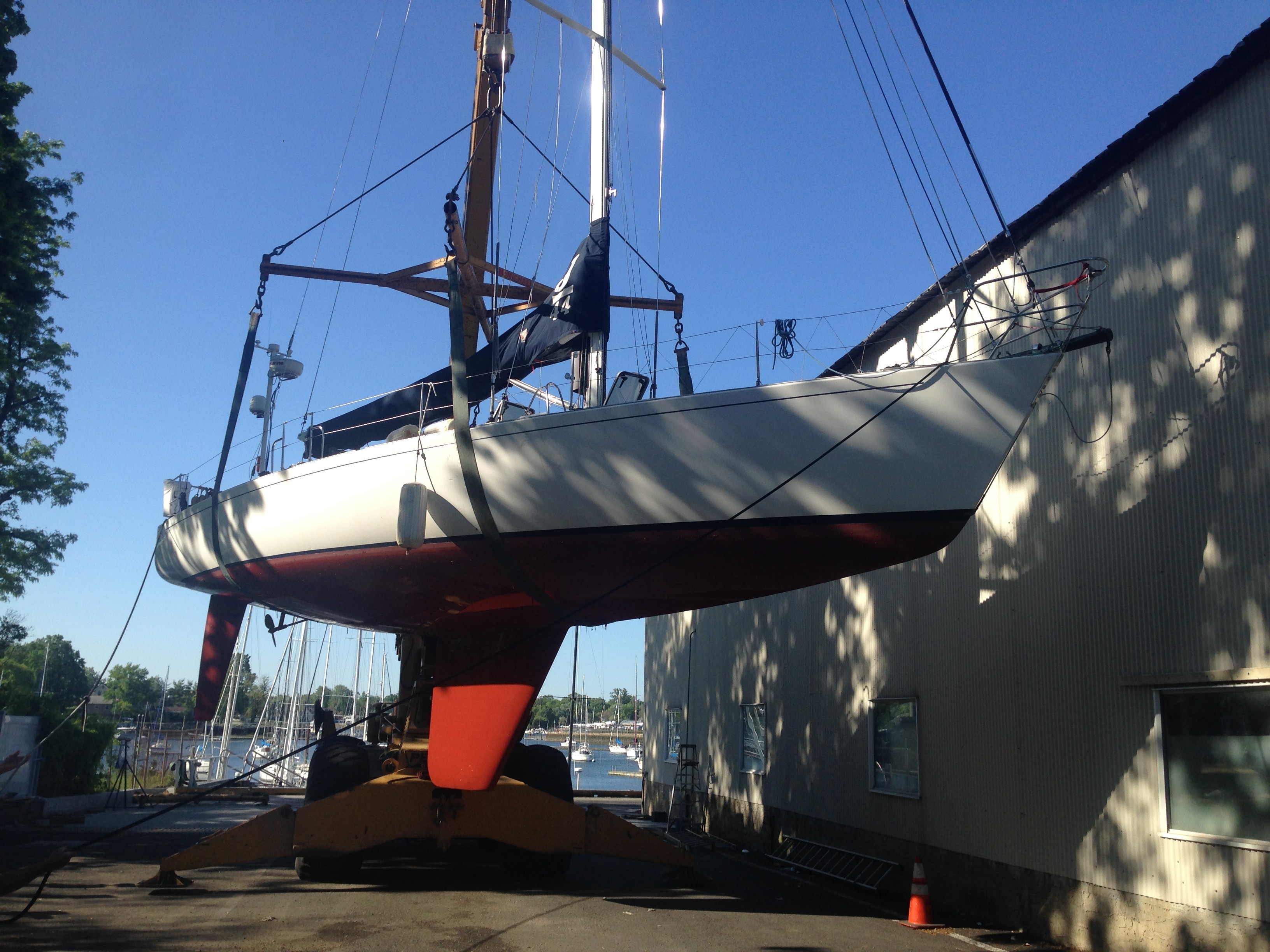 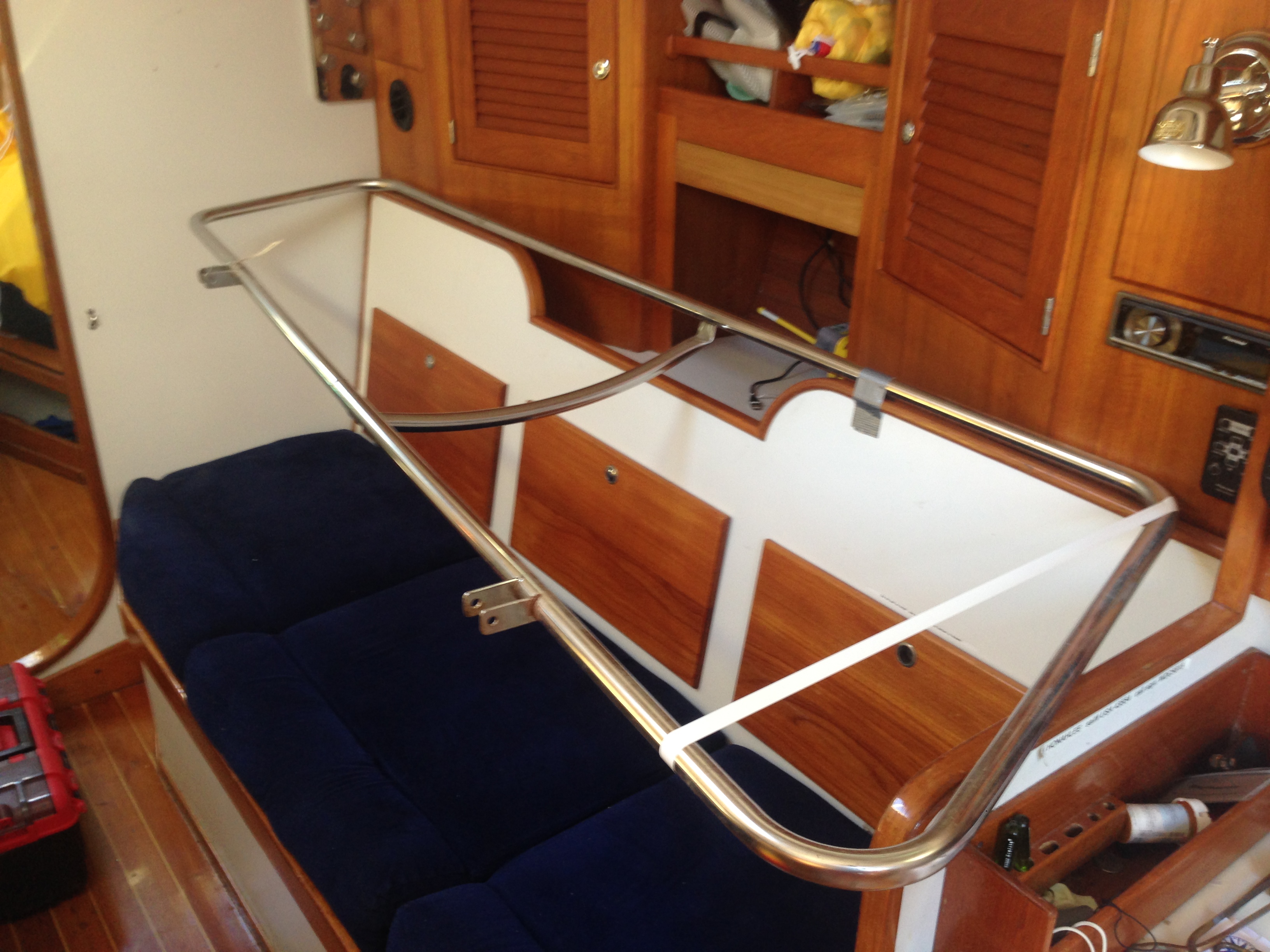